Yoga Over 45 Years of Practice- Chapter 5 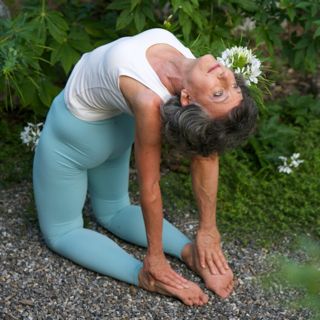 Come 1992 I was feeling quite confident about the way I was teaching yoga the results I was getting. I was 37 when the Iyengar Association put out a call to all certified teachers to teach a class at the 1993 convention in Ann Arbor, Michigan. B.K.S. Iyengar was to be present, and I was ready to be seen. My application was accepted so off I went.

The classes with Mr. Iyengar, who was respectfully referred to as Guruji, were held in a large gymnasium, which was set up to include two large viewing screens, one on either side of the stage. There were 600 of us in attendance—triple the number at my first convention. At other times of the day we met in small groups in the racquetball courts to practice teach under the watchful eye of a senior certified Iyengar teacher.

Enter my next big influencer and mentor, Eric Small

Eric Small, a member of my student/teacher pod at the convention, was over 6 feet tall with knobby, oversized knees, who told wonderful stories. We quickly struck up a friendship and became inseparable. Eric was only 14 years younger than Iyengar, and because he was living with multiple sclerosis, he had received a good deal of individual attention from our Guru. Eric was managing his condition elegantly with his yoga practice.

Imagine practicing yoga eight hours a day for six days. So many teachers, so much information. The last class each day was a two-hour restorative class that followed a specific list of poses determined by Guruji, who had the wisdom to know what would be the best choices to restore our tired bodies and brains. I was assigned three afternoon classes to teach that required rhythm and timing, along with the appropriate support of props. I had gotten pretty good at knowing how to tweak the position of a prop to create the experience intended for each person and pose. The word went around that I was being helpful, and my ego liked that.

My Very Own Class

On the second to last day of the convention, I was given a morning class to teach. This class was to be completely my creation. Guruji was 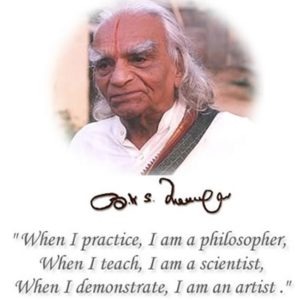 going to inspect my class and the other teachers’ classes to see if he approved of how we were teaching his method.

I was given the list of my 30 students and their ailments. Remember that Mr. Iyengar was known for the way he instinctively could choose the right poses that would foster healing for any number of conditions. My students were all middle-aged. They had lots of conditions—two or three knee surgeries, several with low back and/or shoulder problems. Did I mention the man with cerebral palsy who Iyengar had been helping at the front of the stage in the gymnasium? He was in my class.

In my head all I could think was, “oh shit!” So I planned … for hours, privately.  I considered this pose and that, this person and that, until I came up with a sequence of poses I felt everyone could do without getting hurt, and would, I hope, benefit from the practice. But I did not know what to do with the cerebral palsy student. So I copied my teacher. I put his back against the wall near a corner, a chair in front of him so he could hold on, and asked him to do whatever he could. Then I turned away to teach the other 29 students.

The Moment of Reckoning

It’s important to know that these classes were being held in individual racquetball courts. There were 16 to 20 total courts at the Ann Arbor YMCA athletic complex with a catwalk above. As fate would have it I was in the first court of the row. I had just started teaching my class when my esteemed Guruji with his entourage came around the corner and peered down into my court.

Did I mention that he had a heavy Hindi accent and clearly had his morning coffee when he spoke? Translation: “What are you doing with that man?”  He was shouting down from above. There was a huge echo in that large space, so no matter how hard I tried, I couldn’t understand him. After three tries, Guruji became frustrated and climbed down the metal spiral staircase until we were standing eye to eye. I am 5’2 1/2” and so is he.

I had been around him in my trip to India, but never in such close proximity. And this time I was a teacher, not the student — or was I? He asked me, “Are you helping these people?” My heart leapt up in my chest. I wanted to say “Yes!” but I didn’t want to be too proud or disrespectful, so I paused and glanced away, uncertain how to respond.

If in that moment I had known that I had permission to speak my truth, I would’ve said, “Yes, Guruji, I am helping, but I don’t know how to help this man” (the man with cerebral palsy). If I could have found my voice and asked him to please help me, things would have turned out differently. But alas … that is not what happened.

The act of my glancing away provoked a stern, condescending response, “See her? She doubts herself. Who in this room needs my help?” From all around the room, a chorus of voices chirped, “Help me Guruji. Help me Guruji!” I felt humiliated.

But that’s not the end of this story.

Not only did Iyengar disapprove of my teaching, but several other teachers were found lacking as well. His tirade of dissatisfaction could be heard all the way down my side of the racket courts and up the other, interactions that left many egos bruised and in turmoil.

At the end of class a group of us were commiserating out front on the steps. Guruji had penetrated and put on display each teacher’s Achilles’s heel. In the West we don’t understand this type of teaching … Yet it can be seen as a blessing: if your Guru doesn’t reveal the shadow side of your ego in order to allow you to see into yourself more clearly and grow, then who will? Consider a moth drawn to a flame; the moth gets burned, but returns again and again for the Light is so bright, and so did we.

This may sound like an ugly story about a man who was extremely gifted, named among the top 100 most influential people in the world by Time Magazine in 2004. But you had to be there to experience the intensity of his energy. Mr. Iyengar was a force of nature; he lived in the moment and was brilliant. He was right, I did doubt myself, and I will never forget the feeling of how I betrayed my own truth.

That day my humiliation became my determination.

Clearly there was more I needed to know. I was determined to learn and deepen my understanding to ensure that the next time Mr. iyengar walked into the room where I was teaching I could say with great confidence, “Yes, I am helping these people!”

At that time I knew nothing about working with any kind of neurological dysfunction, so I asked my new friend Eric Small to teach me. This began a 10-year exchange in which I sponsored Eric to teach in Asheville, co-taught with him, or studied with him in L.A., which included peer teaching with his supervision at the UCLA Multiple Sclerosis Clinic.

As evidence of my expanding skills in this area, and in honor of both my teachers, I taught a special Yoga class for people with multiple sclerosis for 8 years. In 2007 I earned the Recreation Leader of the Year award from the Asheville Mayors Committee for Citizens with Disabilities.

What I learned during these years.