How Functional is Your Breath?

An introduction to functional breathing and the associated benefits.This was the exact question I asked myself in January 2002 when my blood pressure rose and my heart rate became rapid and irregular. My heart was in trouble and I knew it. I needed help right away. The help came in the form of purchasing a CPAP machine that is used by millions of Americans to remedy sleep apnea.   Sleep apnea is when a person’s tongue slips back in their throat, blocking the airways and causing someone to snore and or stop breathing, then suddenly gasp for breath. In my case, loss of breath and gasping would often wake me from sleep.

While I have had many years of practice with some classical forms of pranayama, like bellows breath, breath of fire, alternate nostril breath, and bumblebee breath, including the more subtle techniques of breath taught in the Iyengar method, some understanding was missing.

As I dove deeper into a study of breath, my discoveries were both liberating and a bit overwhelming. So while there is really no wrong way to breathe, only more effective or less effective methods, I rediscovered and settled on a few helpful techniques that combine ancient wisdom and modern science. I share them with you now in the hope that they will help you too.

The Diaphragm Regulates the Heart

A typical adult uses as little as 10% of the range of their diaphragm when breathing. Because the heart is intimately attached to the diaphragm, like a large and lovely Christmas tree topper, by connective tissue called fascia, they really operate as a unit.   When we inhale, the blood is drawn into the heart, and when we exhale the blood pumps back out. Extending the breath to use 50 to 70% of the diaphragm’s capacity reduces cardiovascular stress significantly. *

In the case of sleep apnea, much of which goes undiagnosed or ignored by those either without good resources, or those unwilling to make lifestyle adjustments for the sake of longevity and reduced suffering, the diaphragm spasticity makes repeated attempts to contract to make us inhale, until it succeeds with a gasp that wakes the cat and any nearby family members! Because of this, sleep apnea offers a major obstruction to normal heart rhythms and heart health, contributing to high blood pressure and the risk of stroke.

Functional breathing invites all muscles involved in our breathing apparatus to fulfill their role in helping to stabilize the body’s core; namely the Transverse Abdominis muscles (TVA), diaphragm, pelvic floor, psoas muscles along the front of the spine, and the small Multifidi muscles of the back spine.

However when a person is a shallow breather, the inhale and exhale take place in the upper abdomen and chest mostly. This lack of connection to the abdominal muscles and pelvic floor leaves people vulnerable to pelvic instability and lower back pain, along with loss of diaphragmatic tone and breath capacity.

Learning How to Breathe Functionally 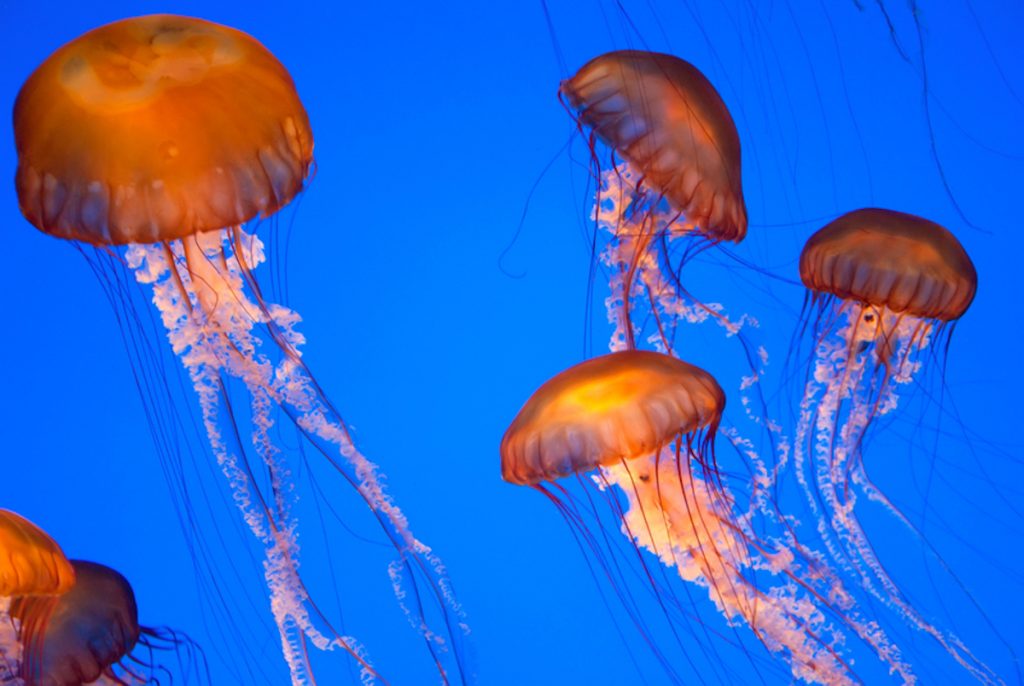 “A picture is worth 1000 words.” This saying points to the wonder of how an image can make a complex subject or group of ideas much easier to understand. This is the case with breathing and the image of a jellyfish in motion.

A jellyfish looks like a mushroom cap with long tentacles hanging down. When a jellyfish breathes, the circle of the mushroom cap expands out effortlessly, similar to your diaphragm when you inhale. On the exhale, the jellyfish contracts its tentacles around an imaginary central channel to propel it through the water.*   Consider the tentacles to be like your Transverse Abdominis muscles, hugging in actively and connecting the pelvic floor to the diaphragm as you exhale.

When we use this image to teach ourselves to breathe spherically, several benefits can be realized, including the release of spinal tension; the even use of the diaphragm to enhance core stability; improved diaphragm shape and tone; more efficient use of oxygen; plus improved lung, kidney, and heart function.

Feel free to share your experience in the comment section below. I would love to hear from you!

More about Lillah Schwartz.  Stay tuned for my next blog where I will cover Chest Breathing and the Vagus nerve. Subscribe to my email list here.